A short story based on “Bereshis” (In the Beginning), reimagining the role of God in the creation of the world. Written by a secular person raised Jewish, this story reflects my confusion being a person with mixed heritage living in England.

In the beginning, I was born. Geysers screamed and thunder clouds roared. The earth was a dark, frothing monster. I closed my eyes and waited: Tossed in the storm, soft and vulnerable, I clung to rocks and reeds, until my fingers bled.

From where my blood fell, writhing, twisting, sparkling creatures sprung. They knocked against my feet, in as much turmoil as the sky, before darting away, and dissolving. I don’t know how long the storm persisted, but eventually it calmed.

I opened my eyes. An ocean surrounded me: an ocean so vast, I couldn’t see any horizon. There was a stillness in the air. It felt like the Earth was waiting.

I felt this overwhelming sense that the next move was mine. I looked down at my scarred fingers and struck them against my rock, with purpose.

To my surprise, the ocean became illuminated from within. Blue and green glowing dots appeared on the crests of the waves. A little time had passed, when the sky began to change colour from black to dark blue. From blue to pink, from pink to gold. With these colour changes, the surface of the sea glittered white. With that, a huge yellow orb began to appear over, what I could now see was, the horizon.

I felt something I had never felt before. On my face, almost a soft tingling feeling. In my body, a wholeness. This orb rose further and further, turning the sky a pale blue, as it did.

Now it was me, the sun, the waves and the sky. After the sun would set, after travelling the entire length of the sky, the waves would be lit up, by those tiny glowing creatures. I enjoyed this time, the ebb and flow of day and night. The warmth of the sun on my body, the cool of the night.

I had been clinging onto my rock for so long that it had worn away, and I was basically floating on the surface of the sea. I found myself wondering what was down there, so down I went.

I saw such vivid colours and shapes. How could it be so flat on the surface yet so textured underneath? It didn’t seem fair at all, so I dove down again, deeper and deeper, until my feet were planted firmly on the bottom. I gripped onto one of the towering structures at its base, and I started to pull it. My feet were slipping around in the mud, but I kept pulling, and pulling. Bubbles were pouring out of my mouth and nose, and with an almighty crack, the mountain became free in my hand.

I was going to swim the mountain up to the water’s surface, and have it float there, but what happened instead confounded that plan. The place from where I had torn the mountain seethed and bubbled. I could feel intense amounts of heat emanating from a red, smoking centre. The water around it was bubbling furiously, and it seemed to only be getting more intense. The ground under my feet was also starting to shake, steam gushing from every tiny little crack. At last, there was an explosion, which sent me soaring up above the surface of the water, and into the sky, where I drifted and observed from a height.

The rock from the bottom of the sea was forming on the sea’s surface. With every explosion, every crash, more would appear. The eruption went on until half of the world was covered: Land and sea together. I stood on the new land and looked around. Wind was whistling over the open plains, and dust was blowing around.

As I watched, the dust began to settle. There was an interminably long stillness, when suddenly I noticed something. It was a small, green, furled thing. I went over to have a closer look. It was soft and flexible to the touch. Right before my eyes, it began to grow, unfurling, getting taller and wider, growing more appendages. Other similar forms began to take shape. Some were smaller, some were larger, some had different colours, but they were all growing up towards the sun.

A thick, sweet smell filled the air. I placed my ear against the trunk of the first tree and heard a deep and gentle heartbeat. These things were all alive. I wanted to lie in the plants and let their scent fill my nostrils forever, but I had now come to understand my role here.

Although the days were bright, night was still dark, even with the glowing sea. So, as the sun began to set, I scooped up some of the water, and flung it into the air. To my joy, the glowing dots stuck in the sky. I scattered more, and then more. Now the sky was bejewelled and sparkling, constellations and galaxies twinkling. I felt it still needed something, and I pondered over what.

Then I remembered the mountain I had torn from the seabed. It floated in the sea, barren, bleached and pitted. After swimming out to it, I gathered all of my strength and gripped it as tightly as I could. I then flung it with all of the force I could muster, and watched it soar away. It came to a halt at one point in the sky, and to my delight it stayed there. It seemed to glow with a silvery white light, reflecting the light of the many stars and illuminating the night.

To my amazement, I found that this new addition actually seemed to interact with the sea. It was as though the sea knew the rock had been torn from it, and the rock knew that the sea was its original home. This interaction brought tides to the shores, and currents.

Now the silence felt whole, and the sea ebbed and flowed along with the days. Trees grew, died and grew again. Life was taking hold.

I plucked a leaf from that first tree and rolled it around in my fingers. As I did that, it began to pulse, to change shape. Soon, I was holding a small winged creature with a pointed beak. It stared at me with bewilderment, and I placed it on the branch of the tree from which it came.

It spread its wings and leapt, taking flight in the wind. I spent the rest of that day creating similar flying creatures for both the sky and the water, from that one tree. 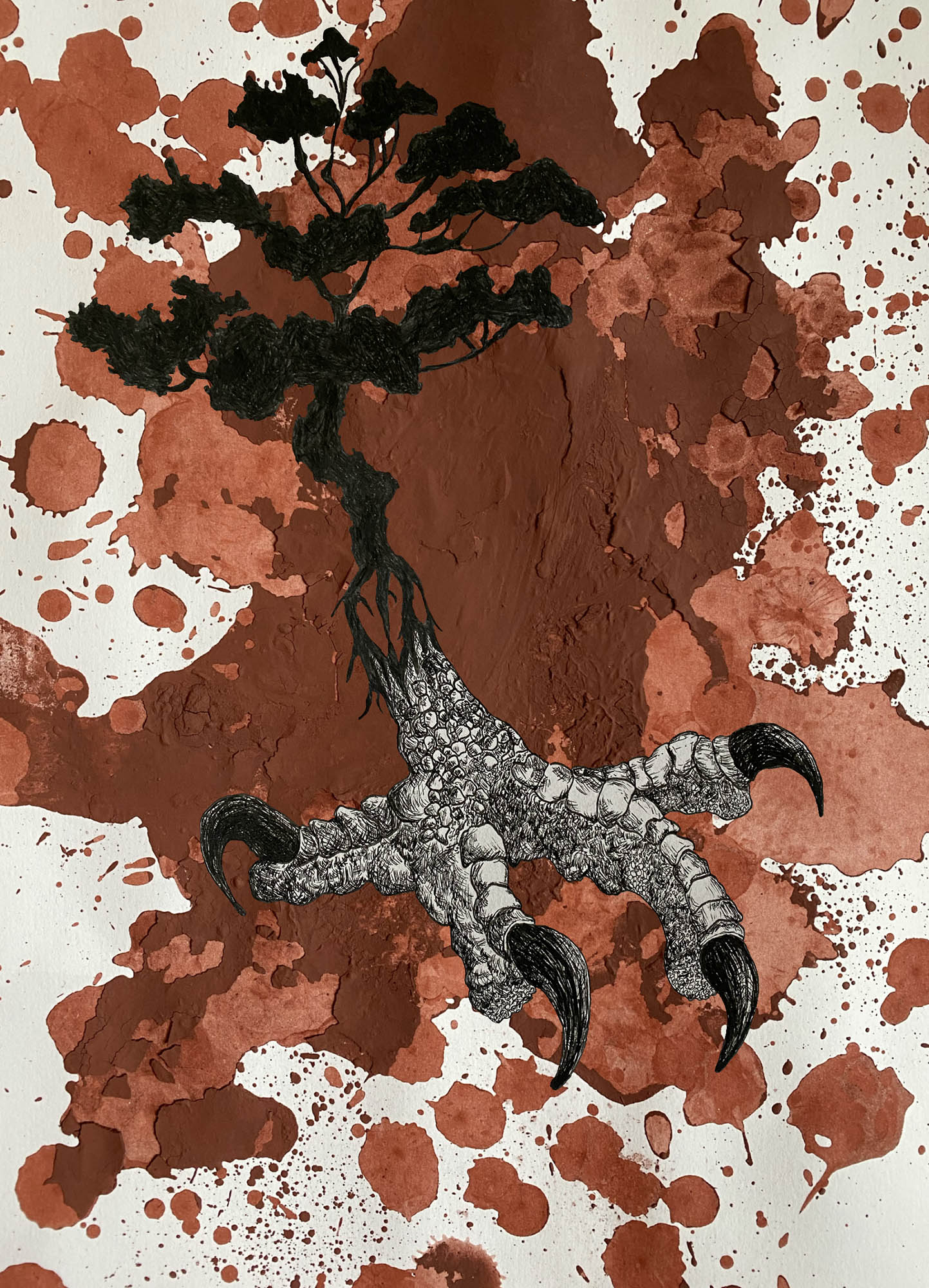 One of my water creatures was a massive, gentle animal that breathed air, yet flew in water. It hummed from the depths of the ocean, its song heard underwater for many miles around.

Now the air was not silent. The trees shushed, the birds chattered and whistled. Even with that racket I could hear the insistent question, “And now?”

I dug up some sea-wetted clay from the ground by the first tree’s roots, and shaped it into a small being with a long tail, four legs and a long flicking tongue. I breathed on it and it came to life, gave me a strange glance, and then slithered away. For the first time in my life, I felt a sense of unease. I tried to shake that feeling off, and set about crafting more legged creatures. I never saw that serpent, but sometimes I would feel as though something was watching me with hard, yellow eyes.

Now I was surrounded with life. I walked, and swam, and flew with my creatures, and I felt nothing but love for all of them. They were all so distinct, so different, and yet their survival was dependent upon that of the others.

Now I looked at my reflection in a pool of water. I was beautiful, but my being did not belong in these surroundings. I had lived too long, seen too much to truly appreciate the tiny complexities of what I had created.

It was time for me to shed my body. As I exited the vessel that had carried me all my life, I was hit with a resounding sense of awareness. Suddenly I could sense everything that was happening, had ever happened, and ever would happen, all over the world simultaneously. With that, came a sweet and sudden sadness. Certainty of the future coming, of the encroaching disruption to my balance and, worst of all, the pain and suffering. I tried to claw myself back into my body, but it was too late.

I could no longer protect the earth I had created with just myself. So, from the memory of how I looked reflected in the lake, I created two creatures from the Earth, and I told them: “This garden is now your charge. Protect it. Eat from any tree that you wish, but please leave the largest tree alone. All of the life you see around you has come from that one tree, and if you were to touch it the consequences would be beyond my control.”

To my shock, they both flung themselves to the ground, and pledged their everlasting loyalty and protection to my world. I saw that it was good, and, finally, I rested.